I first tried on some shoes Neil had recommended: Mizuno Wave Kazan.  They definitely felt like they would fulfil my needs.  (After a google search later at home, I’m glad I didn’t go for them, as they are not performers in wet/ slippery conditions, which is what I was after). I couldn’t resist trying on some Hokas, to compare and 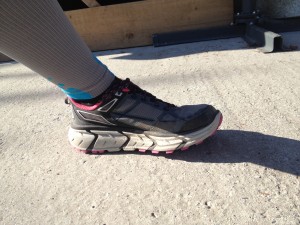 and see what all the fuss was about.  A little run outside in them, and I felt I couldn’t resist.  I felt I could run for ever.  It was like the lightest of underfoot pillows, and I was almost forced to lean forwards.  I was shocked that I felt so happy in them.  Neil agreed he had felt the same.  The shop did not have my size in the trail (ATR challenger) model, otherwise I would have walked away with them then and there.  Let me clarify, they DID have my size, but my toes felt restricted after years of spacious barefoot-shoes, so I wanted half a size bigger (which I have also since read is advisable in hokas) even though the staff thought this would be too big.  I made the error of not trying on the 7 with the thinner soles (they come with two sets) but anyway I still think I needed the 7.5, due to that wider front section of my foot.   Neil and I had a good chat, and I felt Hokas may be a good idea, not necessarily a ‘forever’ shoe, but at least until my back felt stronger.  He told me Hoka drove him crazy with sporadic deliveries, so better I order elsewhere online.  He had been so helpful I wanted to give him my custom, but as it transpired they did not get my size in, so I ordered online in UK. (Sportlink ship to Malta).

I did a trial 30-min run in Hokas in Essex, a riverside path.  They felt amazing, but something hurt like a strain on the outside of my right foot.  This was gone by the next day, but I put it down to my feet being used to the opposite extreme.  There was zero ground feel in the hokas, but this ground feel was replaced by bounce and lightness. I did feel ‘my feet had been left at home’ which was what I preferred not to experience in barefoot running: my feet are used to curling and yielding to the terrain, it was also nice to experience something different, for a change, but i do like to move my feet bones.  I wore the hokas on my  journey to France, to break them in a bit.  I exclusively wear lunas year round day-to-day, so I missed the toe-freedom, but this was all about helping my back by pushing my weight forwards. My second run in hokas was up a  long and steep mountain road in the French Alps.  It was a hot day and I felt I wished I was wearing lunas on the ascent.  My feet felt heavy (despite the seemingly impossible weightlessness of the Hokas).  However on the downhill, this is when the Hokas came into their own.  Downhill is my thing, but when I twisted my knee on a technical downhill, my confidence took a knock and I was desperate to get it back.  Hokas gave me this confidence back, I was flying down the hill, although with no ground feel, my feelings for trail running in them are mixed.

A couple of days later I did the mountain course of the Samoens trail, 20km, 1,200 metres of ascent (1,000 in the first 9 km). This was a good if brutal test of the Hokas. And we fell out.  I had the thinner soles in as this feels most comfy for the front of the foot.  Maybe I didn’t tie them tightly enough to prevent movement at the back, or maybe I should’ve gone with the thicker insoles, or maybe I needed a bit more time to break them in.  I haven’t had a blister since New York marathon in 2006 (and then only because I unwisely tapped my toes), I am not used to blisters at all, and after the first 9k I could feel one arising at the outside of my left heel. 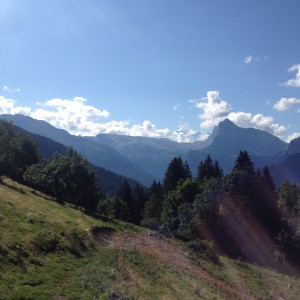 But then the descent meant the pressure point changed.  When we came across slippy sections, I was happy I had chosen the Hokas that morning (especially as I had lost confidence on running technical downhills it was nice to not have to worry about slipping like in the vivos).  However, a couple of times I did, and I’m not sure how to describe this, come disconnected, or off, the sole.  So, if you are a lady and have ever worn closed platform shoes, it’s that feeling when you slide off the thick sole, so the foot comes flat to the ground snd the sole is off to the side, that happened a couple of times.  I guess that is maybe a sign of a loose fit. The final 200m ascent was steep and the blister feeling on my left foot was annoying.  We could then run the final distance downhill, but the only thing stopping me was my feet.  I felt they had had enough.  Even running downhill, even with all the space around my toes, it felt they were getting pounded on and I saw no point in pushing through it, especially as by this point my running buddy had had enough and was no longer running.  I was looking forward to getting the cumbersome shoes off.  I plan my next run to be in the vivos.  Not exclusively, but at least for a few days, to regain some movement freedom in my feet.

Of course, I be no means think that six hours of Hoka running is comprehensive testing

This are preliminary thoughts, whilst I have time to note them down

Cheers for reading and I wish you all a lifetime of happy running, whatever you choose to wear on ya feet!