This time when I got back home to Malta after a summer in UK and France, I found it tricky to settle.  More than at any other time before.  The feeling of being happy to be coming back to home abroad, had been lasting for shorter periods each time I returned to my life here.

The taxi driver was 1 hour late leaving with us from the airport, so we left at 1am instead of midnight and I was just immediately tired of Malta.  I’m not going to Malta bash, why would I?  There’s so many awesome things about this country.  The other day I got back from the beach with friends and kids (awesome in itself) and hungry and tired grabbed the kids and bags, ate dinner and about 2 hours later was looking for their water bottles.  I realised I was missing my handbag with the bottles in, and my purse, money, all the important stuff.

I knew instantly I had left it somewhere ‘bad’.  I went down to the car and the passenger side door was wide open, my bag on the passenger seat! It had been that way for some hours.  Quite a lot of people pass there on Saturday night, and I thought of all the times we had been lucky in similar situations here.

I also love running here. The weather is almost always perfect. The smells and feel of the countryside at night is something I’ve never experienced in the UK. END_OF_DOCUMENT_TOKEN_TO_BE_REPLACED

I was that girl in P.E. who always forgot her kit.  On purpose.  I detested physical exercise.  It was so boring and regimented, and getting undressed showered and dressed again for about 20-60 mins of doing something boring in the rain, whilst being dictated to by some barking little jumpy woman was just plain ridiculous in my book.

The minute I left school for 6th form and P.E was no longer compulsory, I started swimming a mile a day before school.  I started to love exercise.  But running was not and had ever been my thing.  Especially long distance.

I was 20 and in my second year of a law degree.  My house-mate Ali was probably the most persuasive girl I’ve ever met.   She suggested we train for and run Sheffield half-marathon.  So we did.  To my surprise we would do 5 miles out to the peak district and back to our house. Once I did this twice in one day.  It was fun.  Fun-ish.  After the run we’d do some sit-ups and some other crazy stuff (I swear that Ali invented) at home.   Then, we fell off the wagon.

I was turning 21 and had two birthday parties, one at home with family and friends and one at uni.  Tom Farmer came up from home with another school friend to stay for my Uni 21st.  I loved Tom.  Something about the fact that he was born with Cystic Fibrosis, seemed to influence his character.  In that, he was the most fun-loving, easy going, relaxed and happiest of all of us.  I never saw him hung-up about any of the things that stressed the rest of us from time to time.  He was an awesome and infectiously positive guy to be around.  And very funny.

Tom knew I’d ‘started’ running and at that party he suggested we run the New York marathon together the following year to raise money for CF (Cystic Fibrosis) Trust.  I agreed that we could and should do that.

However, when the morning of the Sheffield half-marathon rolled around, I hadn’t ran for more than a month.  In that month I had been on holiday to Cyprus, had two 21st birthday parties and spent the day before the race lounging in the park with chips and beers, laughing with friends about how we weren’t doing the race in the morning.

Ali tells me we made an arrangement to meet under the action-man clock in our living room with a tin of baked beans and a spoon (my favourite student fuel) at 7am.  This obviously slipped my mind… END_OF_DOCUMENT_TOKEN_TO_BE_REPLACED

I’ve not been writing for a while. 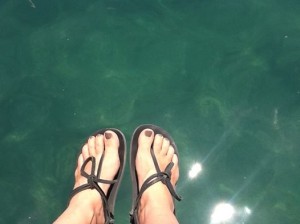 I’ve been reading, running and generally getting busy…  Also I updated the blog theme, and lost a lot of features… So I am slowly trying to figure that out.

I plan to be back at it in autumn, I’m away all summer and my twins have basically finished school now, so am busy packing and finding babysitters for my plants, in between running, and running around after them.

In the meantime I thought I would share the below report link, as it made me LOL.