This recipe is a nice healthier substitute for chicken nuggets.  I tend to make the cakes a big bigger, small-hand held size.  The dip is vegetarian, but you could omit it or make a vegan version (with vegan yoghurt and cream). 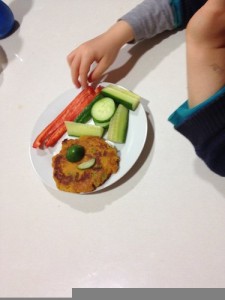 I serve this with a mixed green salad (or raw vegetable sticks).

Keep the mix and burgers separately in the fridge for 3-5 days. It’s sometimes easier to make the mix the night before and then cook them quickly when the kids get home from school.